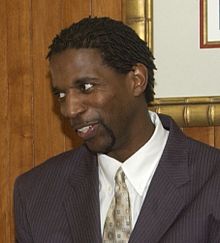 A. C. Green, Jr. (born October 4, 1963) is an American retired National Basketball Association (NBA) player who played in more consecutive games than any other player in NBA and ABA history. With 1,192 straight games played, he earned the nickname "Iron Man". He played for the Los Angeles Lakers, Phoenix Suns, Dallas Mavericks and Miami Heat. He was born and raised in Portland, Oregon and attended Benson Polytechnic High School. He was inducted into the Oregon Sports Hall of Fame in 2003. He played in 1278 out of 1281 games in his career (99.8%), with the three he missed coming in his second season, 1986–87

Kids are dying from causes of sexual activity. You're not going to find a tombstone stating that Fra ...

No matter how strong a condom is, it won't protect you from a broken heart.

Mr. Lemon-Man has inspired millions across the world through his gift. I don't refer only to basketb ...