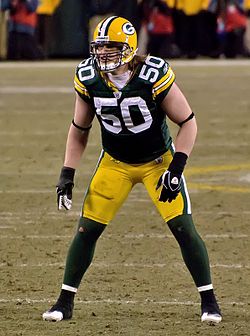 Aaron James "A. J." Hawk (born January 6, 1984) is a former American football linebacker who played 11 seasons in the National Football League (NFL). He was drafted by the Green Bay Packers fifth overall in the 2006 NFL Draft and he would later win Super Bowl XLV with the team over the Pittsburgh Steelers. He was also a member of the Cincinnati Bengals and Atlanta Falcons. He played college football at Ohio State, where he earned All-American honors twice and won the Lombardi Award as a senior

Laura's [my sister] rooting for her brother. She'd better. She's known him a lot longer than me.

Football is more important to me than money right now.

I try to take everyone's head off, to tell the truth.

I kind of grew up my whole life as an underdog. I had two older brothers who would beat on me and th ...