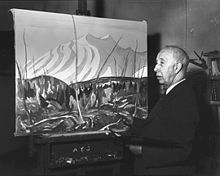 Alexander Young Jackson CC CMG (October 3, 1882 – April 5, 1974) was a Canadian painter and a founding member of the Group of Seven. Jackson made a significant contribution to the development of art in Canada, and was successful in bringing together the artists of Montreal and Toronto. He exhibited with the Group of Seven from 1920. In addition to his work with the Group of Seven, his long career included serving as a war artist during World War I (1917–19) and teaching at the Banff School of Fine Arts, from 1943 to 1949. In his later years he was artist-in-residence at the McMichael Gallery in Kleinberg, Ontario

The obedient in art are always the forgotten . . . The country is glorious but its beauties are unkn ...

Chop your own path. Get off the car track

What to paint was a problem for the war artist... the old heroics, the death and glory stuff, were g ...

Artists are often excellent businessmen. They have to be. Otherwise they do not remain artists.

To Lawren Harris art was almost a mission. He believed that a country which ignored the arts left no ...

Not knowing all of the conventions of beauty, he [Tom Thomson] found it all beautiful.

It's probably hard for anyone looking at my landscapes today to realize that I was once regarded as ...

“I woke up for about a minute, and I remember seeing Austen lying on the ground. I was so mad I couldn't help him. I felt paralyzed. I tried to tell him I loved him, but I couldn't talk.”