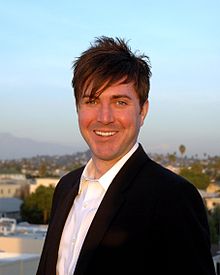 Aaron Douglas O'Connell (born March 5, 1981 in Allentown, Pennsylvania) is an American experimental quantum physicist. While working under Andrew N. Cleland and John M. Martinis at the University of California, Santa Barbara, he created the world's first quantum machine. In particular, he was able to transfer the quantum state of a superconducting quantum bit, a device used in quantum computation, to the motional state of a macroscopic mechanical resonator. His measurements of the quantum machine constitute the first direct observations of quantized behavior in the motion of a visible object and led the journal Science to honor his work as the "Breakthrough of the Year" of 2010

We talk about quantum weirdness and things being in two places at once, but it all involves atoms an ...

If I realize that actually there's quantum mechanics happening around us all the time in some macros ...

The qubit acts as a bridge between the microscopic and the macroscopic worlds.

Scientists and academics in particular focus on detail and the minutiae. When they talk to each othe ...

If you go into any physics lab, everybody is depressed and feels isolated. We don't get any feedback ...

“If you are a stock broker, you have to have responsibility, like a painter, you have to know your subject. You have to advise people right, and if you're more often right than wrong, I think you're doing fine.”