Abdullah Yusuf Ali (Urdu: ??????? ???? ????), CBE, MA, LL.M, FRSA, FRSL (/???li?/; 14 April 1872 – 10 December 1953) was a British-Indian barrister and scholar who wrote a number of books about Islam and whose translation of the Qur'an into English is one of the most widely known and used in the English-speaking world. A supporter of the British war effort during World War I, Ali received the CBE in 1917 for his services to that cause. Following two unhappy marriages his children turned against him and he died destitute and alone in London in 1953 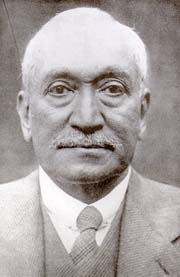 To Allah we belong and to Him is our return.

Approach or come: refers not to the physical act of coming, but to the mental attitude; the heart is mentioned for sincerity. When they sincerely promise not to fight against you, do not pursue them. Remember that if they had fought against you, your difficulties would have been increased. Their neutrality itself may be a great advantage to you. So long as you are satisfied that they are sincere and their acts support their declarations of peace with you, you should not consider yourself justified in pursuing them and warring against them.

At the same time the Muslims are commanded to exercise self-restraint as much as possible. Force is a dangerous weapon. It may have to be used for self-defense or self-preservation, but we must always remember that self-restraint is pleasing in the eyes of Allah. Even when we are fighting, it should be for a principle not out of passion.