Abebe Bikila (Amharic: ??? ????; August 7, 1932 – October 25, 1973) was an Ethiopian double Olympic marathon champion. He won the marathon at the 1960 Summer Olympics in Rome while running barefoot, setting a world record. At the 1964 Summer Olympics in Tokyo, Abebe was the first person to successfully defend an Olympic marathon title and broke his own world record. He was a member of the Ethiopian Imperial Guard, an elite infantry division that safeguarded the Emperor of Ethiopia. Enlisting as a non-commissioned officer before his athletic career, he rose to the rank of shambel (captain). In Ethiopia, Abebe is formally known as Shambel Abebe Bikila (Amharic: ???? ??? ????) 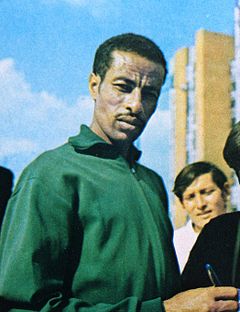 I wanted the world to know that my country Ethiopia has always won with determination and heroism.