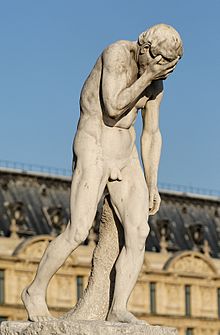 Cain and Abel (Hebrew: ????? ,?????? Qayin, He?el; Arabic: ?????? ??????? Q?b?l, H?b?l) were sons of Adam and Eve. Cain, the firstborn, tilled the soil, and his brother Abel was a shepherd. The brothers made sacrifices to God, each of his own produce, but God favored Abel's sacrifice instead of that of Cain. Cain murdered Abel. God punished Cain to a life of wandering, but set a mark on him so that no man would kill him. Cain then dwelt in the land of Nod (????, "wandering"), where he built a city and fathered the line of descendants beginning with Enoch. The narrative never explicitly states Cain's motive (though it does describe him as being wrathful, and his motive is traditionally assumed to be envy), nor God's reason for rejecting Cain's sacrifice, nor details on the identity of Cain's wife. Some traditional interpretations consider Cain to be the originator of evil, violence, or greed

Happy are those who expect nothing; they won't be disappointed

Of course, among the confused motives that spurred me toward being a writer was also the desire to look, to be above the trees and rooftops, beyond the Malaysian horizon that circumscribed my life.