Abraham Robinson (born Robinsohn; October 6, 1918 – April 11, 1974) was a mathematician who is most widely known for development of non-standard analysis, a mathematically rigorous system whereby infinitesimal and infinite numbers were reincorporated into modern mathematics. Nearly half of Robinson's papers were in applied mathematics rather than in pure mathematics 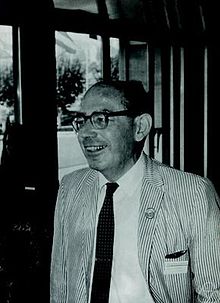 As far as I know, only a small minority of mathematicians, even of those with Platonist views, accept the idea that there may be mathematical facts which are true but unknowable.

Arithmetic starts with the integers and proceeds by successively enlarging the number system by rational and negative numbers, irrational numbers, etc... But the next quite logical step after the reals, namely the introduction of infinitesimals, has simply been omitted. I think, in coming centuries it will be considered a great oddity in the history of mathematics that the first exact theory of infinitesimals was developed 300 years after the invention of the differential calculus.

“The Committee supports the idea that there should be, within the University of California, a campus which puts particular emphasis on the education of undergraduates within the framework of a College system.”

“We conclude that, simultaneously with the organization of the colleges, there should be at Santa Cruz an organization by disciplines, whose units would have a voice in appointments and promotions, in course of programs, and in the allocation of funds for research.”

I've made it a policy to move every five years, either physically or in my research.