Abraham Whipple (September 26, 1733 – May 27, 1819) was an American Revolutionary War commander in the Continental Navy, and later one of the founders of Marietta, Ohio. Born near Providence, Rhode Island, Whipple chose to be a seafarer early in his life and embarked on a career in the lucrative West Indies trade, working for Moses and John Brown. In the French and Indian War period, he became a privateersman and commanded privateer Game Cock from 1759 to 1760. In one six-month cruise, he captured 23 French ships 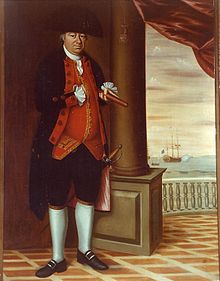 I received orders from Congress to proceed to Charleston in South Carolina, for the purpose of Co'operating with General Lincoln in the defense of that Capitol.

I have never received a Farthing of Prize Money either for Artillery Ammunition or Vessels.