Ab? Hurayrah ad-Daws? Alzahrani (Arabic: ??? ????? ?????? ???????????; 603–681), often spelled Abu Hurairah, was a companion of the Islamic prophet Muhammad and the most prolific narrator of hadith. He was known by the kunyah Abu Hurairah ("Father of the Kitten"), but his real name is differed upon, the most popular opinion being that it was ‘Abd ar-Ra?m?n ibn ?akhr (??? ?????? ?? ???). Abu Hurairah spent 2 years in the company of Muhammad and went on expeditions and journeys with him. It is estimated that he narrated around 5,374 ahadiths. This has driven people to criticize him due to most of his hadiths being Aahad (the sermon was only witnessed by one person, or one region) 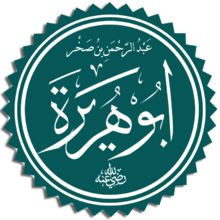 Allah makes the way to Jannah easy for him who treads the path in search of knowledge.

The Prophet (peace be upon him) said, 'The signs of a hypocrite are three: 1. Whenever he speaks, he tells a lie. 2. Whenever he promises, he always breaks it (his promise). 3. If you trust him, he proves to be dishonest (if you keep something as a trust with him, he will not return it).'