?Abd al-Ra?m?n b. ?Al? b. Mu?ammad Abu ’l-Faras?h? b. al-Jawz? (1126 – 14 June 1200), often referred to as Ibn al-Jawz? (Arabic: ??? ??????, Ibn al-Jawz?; 1126 – 14 June 1200) for short, or reverentially as Imam Ibn al-Jawz? by Sunni Muslims, was an Arab Muslim jurisconsult, preacher, orator, heresiographer, traditionist, historian, hagiographer, and philologist who played an instrumental role in propagating the Hanbali school of orthodox Sunni jurisprudence in his native Baghdad during the twelfth-century. During "a life of great intellectual, religious and political activity," Ibn al-Jawzi came to be widely admired by his fellow Hanbalis for the tireless role he played in ensuring that that particular school – historically, the smallest of the four principal Sunni schools of law – enjoy the same level of "prestige" often bestowed by rulers on the Maliki, Shafi'i, and Hanafi rites 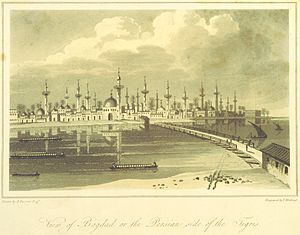 Abu'l-faraj Ibn Al-jawzi has no image quotes at this time.