Adam Derek Scott (born 16 July 1980) is an Australian professional golfer who plays mainly on the PGA Tour. He was the World No. 1 ranked golfer, from mid-May to August 2014. He has won 29 professional tournaments around the world (3 being unofficial money events), on many of golf's major tours. His biggest win to date was the 2013 Masters Tournament, his first major championship and the first Masters won by an Australian in its history. Other significant wins include the 2004 Players Championship, the 2011 WGC-Bridgestone Invitational and the 2016 WGC-Cadillac Championship. He was the runner-up in the 2012 Open Championship, leading by four strokes with four holes to play before bogeying all of them to lose the title by a stroke to Ernie Els 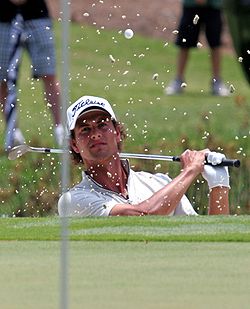 When I was in high school, there's no doubt I was trying to swing like Tiger Woods when he first came on tour.

I keep a very low profile in Switzerland. There are only about 2,000 people in the village I live in, so it's a quiet town.

There's one guy who inspired a nation of golfers, and that's Greg Norman. He's been incredible to me and all the great golfers.

To win a major championship - I think, at the end of the day, that's what a golfer's career is based upon.

It is amazing that it is my destiny to be the first Aussie to win the Masters.

The good part is if I play a solid round of golf, it will be very hard for the others to beat me. And that's all I'm thinking about.

#Golf #Part Of Me #Solid

You know, I go to work in a great office every day, and the amount of freedom that goes with being a pro golfer on the tour is awesome. So I get to enjoy my weeks off away from the course, and then I get to go to work on some of the best golf courses in the world out here.

If all else fails, birdie the last.

To make a couple putts to win the Masters is just an amazing feeling.