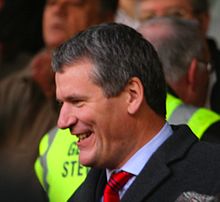 David Alan Gill (born 5 August 1957) is British football executive, formerly chief executive of Manchester United and a vice-chairman of The Football Association. He served as vice-chairman of the G-14 management committee until the G-14 was disbanded. He sits on the UEFA Executive Committee as of 2013. Gill was elected as a FIFA Vice-President sitting on the FIFA Council in 2015; rejecting this position in protest at Sepp Blatter until Blatter announced his resignation as FIFA President, following the 2015 FIFA corruption case

“Our future's very bright. We do have a lot of great seniors, but hopefully everybody else will st ...

I'm taking T.O., every day... He gives me the whole football field.