Adam Bernard Mickiewicz ([mit?s?k??vit??]; 24 December 1798 – 26 November 1855) was a Polish poet, dramatist, essayist, publicist, translator, professor of Slavic literature, and political activist. He is regarded as national poet in Poland, Lithuania and Belarus. A principal figure in Polish Romanticism, he is counted as one of Poland's "Three Bards" ("Trzej Wieszcze") and is widely regarded as Poland's greatest poet. He is also considered one of the greatest Slavic and European poets and has been dubbed a "Slavic bard". A leading Romantic dramatist, he has been compared in Poland and Europe to Byron and Goethe 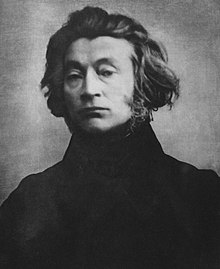 Whoever comes to me, will be free and equal, because I am FREEDOM.

#Free Will #Free will

You [Chopin] have in your fingers an orchestra of butterflies.

The nectar of life is sweet only when shared with others.

Now my soul is incarnate in my country, My body has swallowed her soul, And I and my country are one. My name is million, for I love and suffer for millions.

I am the master! I stretch forth my hands, even to the skies! I lay my hands upon the stars, as on the crystal wheels of the harmonica. Now fast, now slow, as my soul wills, I turn the stars. I weave them into rainbows, harmonies. I feel immortality! I create immortality!