Adam Robert Oates (born August 27, 1962) is a retired Canadian professional ice hockey player, former co-head coach for the New Jersey Devils and former head coach for the Washington Capitals. He played 19 seasons in the National Hockey League (NHL) for the Detroit Red Wings, St. Louis Blues, Boston Bruins, Washington Capitals, Philadelphia Flyers, Mighty Ducks of Anaheim and Edmonton Oilers. Known as an elite playmaker, his career total of 1,079 assists was the fifth highest total in NHL history at the time of his 2004 retirement. After retiring as a player, he served as an assistant coach for the Tampa Bay Lightning and New Jersey Devils prior to joining the Capitals as their head coach for two seasons between 2012 and 2014. On January 27, 2017, in a ceremony during the All-Star Weekend in Los Angeles, Oates was part of the second group of players to be named one of the '100 Greatest NHL Players' in history 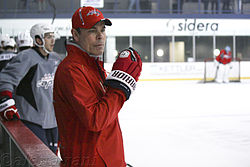 Growing up as a kid my father was British and a soccer player. His idol was a guy that passed the ball a lot, Stanley Matthews. Our family thought if you could be unselfish your teammates would always like you.

Assistant coaches become a little bit more buddies to the players than a head coach.

I grew up trying to play for the Toronto Maple Leafs, not Team Canada. Didn't even know it existed.

I went to the Hall of Fame with my dad. I can't say I really remember too much about it.

I was 19 years old, pumping gas and going nowhere. I was kind of a high school dropout at that point because I had left school to play hockey, but no one drafted me.

Even the superstars need to be coached once in awhile.

I was a punk. I think that's why I'm such a good person now, because I was such a bad guy then.

I can't be a hypocrite as a coach because as a player that's what I wanted. I wanted feedback, I wanted communication from the boss. I showed up for work, you can yell at me if you want, but I want input. So that's the kind of coach I want to be.

You eat and sleep it all day long and play on the streets until mom calls you in. My story is no different than anybody else's.