Adam Brooks Reed (born January 8, 1970), is an American animator, voice actor, screenwriter, producer, and television director. Reed created and wrote FX's adult animated comedy series Archer, which premiered in September 2009. He was also a voice actor, writer, director and producer for the cartoons Sealab 2021 and Frisky Dingo, which he co-created with Matt Thompson 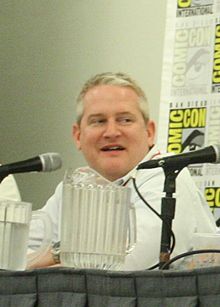 But strangely, [in] the original Matt Helm books, he's just this super hardass assassin. They sort of made it into a sexy romp for the movies. The books are very, very dark. I also watched OSS 117: Cairo, Nest Of Spies, which is a French film. They just made a second one, I think, which is based on like, 100 novels. They're just fantastic. They're set in the '60s. A lot of the visual inspiration definitely came from 1960 James Bond movies and OSS 177 and also Pink Panther movies.

Probably I'm more of a fan of the literary references than the pop-culture references. But I do go to the pop-culture well quite frequently because people, I think, are sort of inherently ready to laugh at that. It's a free laugh almost. Usually, everybody gets it.

If you make a Star Wars reference, everybody's familiar with that. It's a common reference that most people can relate to - Bartleby, The Scrivener, probably not so much.

I get enough of that on the news, so I didn't want to deal with fundamentalists or any sort of thing like that. I just wanted to keep it as lighthearted as the Cold War was, which obviously it was a fun time for everybody.

I watched a lot of the James Bond movies, certainly, both the old ones and the reboot with Daniel Craig. I watched a lot of the Matt Helm films with Dean Martin, which just have these great car scenes where it's rear-projected, and they just start making martinis out of a bar in the glove compartment.

I really liked the design aesthetic of the mid-century modern for furniture and the early '60s stuff for the clothes. But then, personally, I'm a huge fan of 1970s muscle cars. Cell phones is just a laziness thing because it's so much easier to have somebody have a cell phone than have to go to a phone booth. So we're sort of, I guess, cherry-picking the best and easiest from several decades.

I was telling somebody about in grammar school we used to have the duck-and-cover drills where we'd have to go down to a fallout shelter in the basement. We'd sit on our butts on the ground next to the wall with a textbook over our heads and our knees sort of drawn up to our chest. I don't think they still do that. They're sort of sobering. You leave recess and come in for the apocalypse drill.

I think the animation helps divorce the violence from reality. The sex certainly doesn't look all that realistic. I think the fact that it's animated, we get some leeway because of that.

In fact, now for whatever reason, if we're recording in the same room, I get a little distracted because I'm watching the actor instead of listening to the actor. The way we do it now, they're on the phone, and we're sitting here with scripts in front of us taking notes seriously and marking takes and doing some adlibs. I can really focus on the words and not the surroundings.