Adam Parrish Wainwright (born August 30, 1981) is an American professional baseball starting pitcher for the St. Louis Cardinals of Major League Baseball (MLB). The Atlanta Braves selected him 29th overall in the first round of the 2000 amateur draft from Glynn Academy in Brunswick, Georgia. His performance in the minor leagues brought him notice as one of the Braves' top pitching prospects. The Braves traded him to the Cardinals after the 2003 season, receiving outfielder J. D. Drew in a deal which has since been considered lopsided in favor of the Cardinals. Wainwright made his MLB debut on September 11, 2005, against the New York Mets 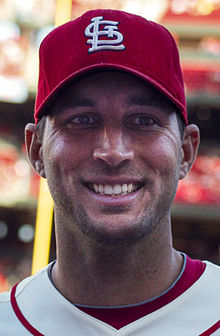 I thought there was a chance right from the beginning.

I'd like to think that on a lot of teams, I'd be a No. 1. The thing I do know is that every time I take the mound, in my mind I'm the best pitcher in the league.

“It was nice of Jason to let me start that game. He didn't have to let me do that. It was nice to get a start.”

“I think the years of toiling around in the minors have really helped.”

“For the most part my year went pretty good. I had a couple abysmal starts that really ruined my stats. You can't have those. I need to show them I can be consistent with my pitches.”

“As long as they say bullpen in St. Louis, then I'm all for it. I still think of myself as a starter. ... But this is a good change because it's giving me a big-league opportunity I wouldn't have had as a starter.”

“If I play a bad round, which I've been having lately, Mulder will let me have it. I've heard his whole game before. I don't worry about it. It's getting ready to swing the other way.”