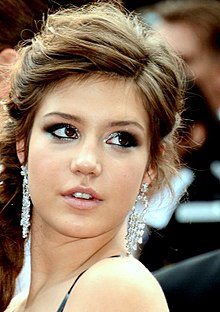 Adèle Exarchopoulos (French pronunciation: ?[ad?l ?gza?k?pul?s]; born 22 November 1993) is a French actress. She is known for her leading performance as Adèle in Blue Is the Warmest Colour, a role which gave her worldwide attention and critical acclaim and for which she became the youngest artist ever to be awarded the Palme d'Or at the Cannes Film Festival. She also won the Trophée Chopard Award for Female Revelation of the Year at the 2014 Cannes Film Festival and received a total of 37 other award nominations for her performance in Blue Is the Warmest Colour, including several wins

It's hard to be natural in a scene when you pick up the phone and no one is there.

In our generation, everybody told us that it's really important and it's nice to be able to speak a ...

In every shoot, between the actor and the director there is manipulation. I'm not saying that negati ...

I just tried to remember how far you can love and how many states you can experience when you're in ...

A violent scene is art, as much as a sex scene is art. For me, all the scenes were a challenge.

Of course, it's always complicated to shoot a sex scene.