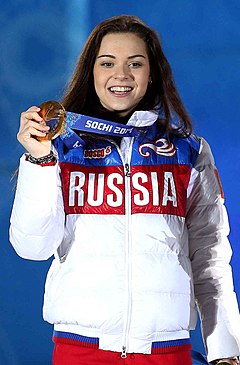 Yes, I am the Olympic champion, but this is not the end of it. I want all the gold that there is out there, everything that exists in figure skating. In all events, in all competitions.

To compete at the Olympic Games, I dreamed of any medal, but frankly speaking, I wanted a gold one.

Figure skating is not a hobby. It's my work, which I want to do, and do well.

The Olympic dream was born in 2010 during the qualifications to Vancouver. And when I was watching those Olympics from the sidelines, I felt that I wanted to have my Games. I understood that it wouldn't be easy to make them, especially now that in Russia there are a lot of strong girls.

When my mother tells me to do something, I'll do my own thing. A strong character can be good, but sometimes it is not good. I hope it's good in my case.

I want all the gold that there is out there â?? everything that exists in figure skating. In all events, in all competitions.