Adeline E. Knapp (March 14, 1860 – c. June 1909) was an American journalist, author, social activist, environmentalist and educator, who is today remembered largely for her tempestuous lesbian relationship with Charlotte Perkins Gilman. In her lifetime, Knapp was known as a fixture of the turn-of-the-century San Francisco Bay Area literary scene. An outspoken writer who often addressed controversial topics in her columns for the San Francisco Call, Knapp wrote on a wide range of subjects from livestock to the Annexation of Hawaii. Though often drawn to progressive causes like child labor and conservation, Knapp also tended to espouse reactionary views, as evidenced by her anti-Chinese sentiments and criticisms of the women's suffrage movement. At a time when many American women were joining the movement to extend political and voting rights to women, Knapp spoke in state senate hearings in New York expressing doubts about the benefits of suffrage to women, and she allowed her speeches and letters on the topic to be used as propaganda by the anti-suffragism movement. Knapp was also the author of numerous short stories, as well as a novel set in the Arizona desert—works reflecting her outdoor enthusiast sensibilities, keen intellect, and interest in Western regionalism. These works, though praised in her lifetime, today have few readers among enthusiasts of Western fiction 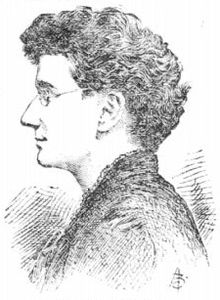 I am sure it is a great mistake always to know enough to go in when it rains. One may keep snug and dry by such knowledge, but one misses a world of loveliness.