William Frederick Halsey Jr., GBE (October 30, 1882 – August 16, 1959), known as Bill Halsey or "Bull" Halsey, was an American fleet admiral in the United States Navy. At the start of the War in the Pacific (1941–45) Halsey commanded the task force centered on the carrier Enterprise in a series of raids against Japanese-held targets. He was made commander, South Pacific Area and led the Allied forces over the course of the Battle for Guadalcanal (1942–43) and the fighting up the Solomon chain (1942–45). In 1943 he was made commander of the Third Fleet, the post he held through the rest of the war 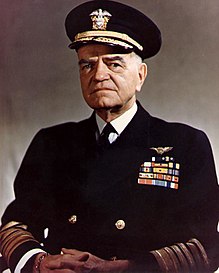 “Before we're done with them, the Japanese language will be spoken only in Hell!”

“There are no great men. Just great challenges which ordinary men,out of necessity, are forced by circumstance to meet.”

“I never trust a fighting man who doesnt smoke or drink.”

“The Third Fleet's sunken and damaged ships have been salvaged and are retiring at high speed toward the enemy.”