Adolf Ivar Arwidsson (7 August 1791 – 21 June 1858) was a Finnish political journalist, writer and historian. His writing was critical of Finland's status at the time as a Grand Duchy under the Russian Tsars. It's sharpness cost him his job as a lecturer at The Royal Academy of Turku and he had to emigrate to Sweden, where he continued his political activity. The Finnish national movement considered Arwidsson the mastermind of an independent Finland 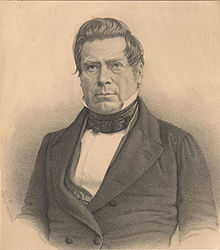 Swedes, we are not - Russians, we do not want to become ... so let us be Finnish.