Lieutenant General Sir Adrian Paul Ghislain Carton de Wiart VC, KBE, CB, CMG, DSO (5 May 1880 – 5 June 1963) was a British Army officer born of Belgian and Irish parents, and recipient of the Victoria Cross, the highest military decoration awarded for valour "in the face of the enemy" in various Commonwealth countries. He served in the Boer War, First World War, and Second World War; was shot in the face, head, stomach, ankle, leg, hip, and ear; survived two plane crashes; tunnelled out of a prisoner-of-war camp; and tore off his own fingers when a doctor refused to amputate them. Describing his experiences in the First World War, he wrote, "Frankly I had enjoyed the war." Wikipedia 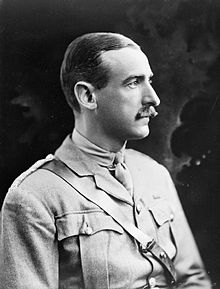 For dash and gallantry the bloodthirsty Scots, Australians and Canadians led the way, with the impetuous Irish close behind. The Australian to my mind were the most aggressive, and managed to keep their form in spite of their questionable discipline. Out of the line they were undoubtedly difficult to handle, but once in it they loved a fight. They were a curious mixture of toughness and sentimentality...

Frankly, I had enjoyed the warâ?¦ and why do people want peace if the war is so much fun?