Adrian Frutiger (24 May 1928 – 10 September 2015) was a Swiss typeface designer who influenced the direction of type design in the second half of the 20th century and into the 21st. His career spanned the hot metal, phototypesetting and digital typesetting eras. Until his death, he lived in Bremgarten bei Bern 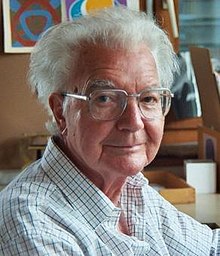 From all these experiences the most important thing I have learned is that legibility and beauty stand close together and that type design, in its restraint, should be only felt but not perceived by the reader.

Typography must be as beautiful as a forest, not like the concrete jungle of the tenements It gives distance between the trees, the room to breathe and allow for life.

When I put my pen to a blank sheet, black isnâ??t added but rather the white sheet is deprived of light. [] Thus I also grasped that the empty spaces are the most important aspect of a typeface.

If you remember the shape of your spoon at lunch, it has to be the wrong shape. The spoon and the letter are tools; one to take food from the bowl, the other to take information off the page... When it is a good design, the reader has to feel comfortable because the letter is both banal and beautiful.

The whole point with type is for you not to be aware it is there. If you remember the shape of a spoon with which you just ate some soup, then the spoon had a poor shape.

The material of typography is the black, and it is the designerâ??s task with the help of this black to capture space, to create harmonious whites inside the letters as well as between them.

I am sure in some years from now you will see new posters with just white space and four lines in Garamond.