Adrian Margaret Smith Piper (born September 20, 1948) is an American conceptual artist and philosopher. Her work addresses ostracism, otherness, racial "passing" and racism. She attended the School of Visual Arts, City College of New York, and Harvard University, where she earned her doctorate in 1981. Piper received visual arts fellowships from the National Endowment for the Arts in 1979 and 1982, and a Guggenheim Fellowship in 1989. In 1987, she became the first female African-American philosophy professor to receive academic tenure in the United States. In 2012, she received the Artist Award for Distinguished Body of Work from the College Art Association. In 2015, she was awarded the Golden Lion for best artist of the 2015 Venice Biennale for her participation in Okwui Enwezor’s central show, “All the World’s Futures” 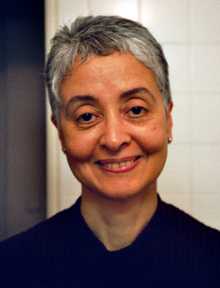 Racism is a visual pathology.

One reason for making and exhibiting a work is to induce a reaction or change in the viewer.... In this sense, the work as such is nonexistent except when it functions as a medium of change between the artist and viewer.

My work is an act of communication, and it's important to me the way what I assert lands, and where it lands within someone who sees it. On the other hand, I also recognize fully and live by the principle that once the work leaves my studio, I cannot control the effects it has.

I am black. What are you going to do about it?