Adrian Lewis (born 21 January 1985) is an English professional darts player for the Professional Darts Corporation (PDC) who is a two-time PDC World Darts Champion. He is nicknamed Jackpot, following a visit to a casino whilst competing at the 2005 Las Vegas Desert Classic when he "won" a $72,000 jackpot but was unable to claim the money as he was under-age by US gaming laws – despite being eligible in the UK. During the early part of his career until 2007, he was a protégé of 16-time world champion Phil Taylor, with whom he practised in their home city Stoke-on-Trent. He made his television debut in 2004, aged 19 at the UK Open 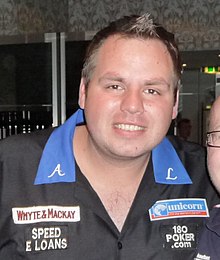 War created the conditions for great advances in technologywithout war men would not traverse oceans in hours, travel in space, or microwave popcorn.