Adriano Giannini (born 10 May 1971) is an Italian actor, son of Giancarlo Giannini. He co-starred in 2002 with Madonna in the widely panned film Swept Away, a remake of the 1974 Italian film with the same name. Adriano played the same role that his father, Giancarlo Giannini, played in the original. He dubbed Heath Ledger's voice in the Italian release of The Dark Knight (his father was the voice of Jack Nicholson/The Joker in Tim Burton's Batman). Giannini has a leading role in the 2012 ABC-TV drama series Missing, starring Ashley Judd and Sean Bean 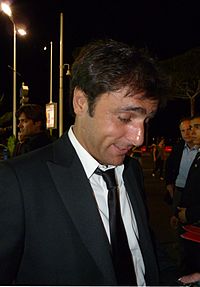 I would like to get a house in Tuscany: aside from New York, cities do not appeal to me anymore.

I grew up a very open and free mind, but also with the flaws of a look on life with too much liberty than people normally have.

I hate the beep beep of the car, when I put in motion and I have not fasten my seat belt. From how annoying this sound is to me every morning, I understand immediately how the day will be.

My mother is not a CIA agent, but she's an Italian mother, and she'd do anything for her son.