Sir Sultan Muhammed Shah, Aga Khan III GCSI GCMG GCIE GCVO PC (2 November 1877 – 11 July 1957) was the 48th Imam of the Nizari Ismaili community. He was one of the founders and the first president of the All-India Muslim League (AIML). His goal was the advancement of Muslim agendas and protection of Muslim rights in India. The League, until the late 1930s, was not a mass organisation but represented the landed and commercial Muslim interests of the British-ruled 'United Provinces' (today's Uttar Pradesh). He shared Sir Syed Ahmad Khan's belief that Muslims should first build up their social capital through advanced education before engaging in politics. Aga Khan called on the British Raj to consider Muslims to be a separate nation within India, then so-called 'Two Nation Theory'. Even after he resigned as president of the AIML in 1912, he still exerted major influence on its policies and agendas. He was nominated to represent India to the League of Nations in 1932 and served as President of the League of Nations from 1937–38 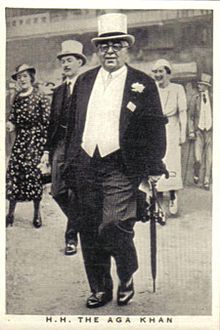 Happiness is never a negative affair; it is to be won by men who are fully alive, full of the joy of living

My father insisted that I learnt the Koran and encouraged me to understand the basic traditions and beliefs of Islam but without imposing any particular views. He was an overwhelming personality but open-minded and liberal.

“Every day has been so short, every hour so fleeting, every minute so filled with the life I love that time for me has fled on too swift a wing.”

Struggle is the meaning of life; defeat or victory is in the hands of God. But struggle itself is manâ??s duty and should be his joy.

Life is a great and noble calling, not a mean and grovelling thing to be shuffled through as best as we can but a lofty and exalted destiny.

There is a fundamental difference between the Jewish idea of creation and that of Islam. The creation according to Islam is not a unique act in a given time but a perpetual and constant event; and God supports and sustains all existence at every moment by His will and His thought. Outside His will, outside His thought, all is nothing, even the things which seem to us absolutely self-evident such as space and time. Allah alone wishes: the Universe exists; and all manifestations are as a witness of the Divine will.