Agnes Emma Baker Pilgrim is a Native American spiritual elder from Grants Pass, Oregon. She is the oldest member of her tribe, the Takelma. She is also the Granddaughter of Jack Harney, the first elected Chief of the Confederated Tribes of Siletz. Pilgrim was Elected Chairperson of the International Council of 13 Indigenous Grandmothers at its founding in 2004. "She has been honored as a "Living Treasure" by the Confederated Tribes of Siletz, and as a "Living Cultural Legend" by the Oregon Council of the Arts." Wikipedia 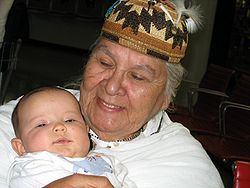 The greatest distance in the world is the 14 inches from our minds to our hearts.