Agnivesh (or Swami Agnivesh; born 21 September 1939) is an Indian politician and a former Member of Legislative Assembly from the Indian state of Haryana, an Arya Samaj scholar, and a social activist. He is best known for his work against bonded labour through the Bonded Labour Liberation Front, which he founded in 1981. Agnivesh became president (2004-2014) of the World Council of Arya Samaj, which is the highest international body of the Arya Samaj movement originally established by Swami Dayanand Saraswati in 1875, and served as the chairperson of the United Nations Voluntary Trust Fund on Contemporary Forms of Slavery from 1994 to 2004 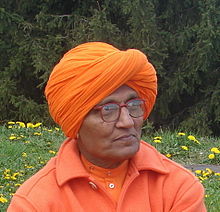 Spiritually, life is a festival, a celebration. Joy is of the essence of life;

For the world order to be one of peace and justice, for the global village to be a theater of right livelihood, it is imperative that a new and proactive spiritual vision commensurate to the challenges of the emerging world order be enunciated without delay.

...all human beings have a right, and duty, to be joyful. Anything that thwarts this spiritual human right goes against the very purpose of human being. Spirituality mandates us to wage a relentless war to eradicate these forces of oppression and disempowerment.

The religions of the world must be assessed, not on the basis of their convoluted theologies, but in terms of the extent to which they serve as forces of liberation and empowerment.

We must not rest until right livelihood is within reach of every human being upon this earth we love and cherish. We all have a role to play in achieving this goal.

Peace among religions is a precondition for world peace.

First, we must liberate people from religion, as religion is understood and practiced today. Second, we must effect a paradigm shift from religiosity to shared spirituality.

Religions have become a hindrance, rather than a help, to our shared pursuit of peace and progress. They tend to make us meaner rather than better human beings, less sensitive to the demands of justice, compassion and fellow humanity in our times.

The essence of spirituality is the duty to live to its full the glorious destiny of being human. The purpose of religion should be to empower all people in this adventure of living with dignity and fulfillment.