Ahmad Bradshaw (born March 19, 1986) is an American football running back who is a free agent. He was drafted in the seventh round of the 2007 NFL Draft by the New York Giants. He played college football at Marshall. He is a two-time Super Bowl champion, winning Super Bowls XLII and XLVI as a member of the New York Giants, defeating the New England Patriots in both Super Bowls. He was the leading rusher in each game, becoming one of eight running backs in NFL history to be the leading rusher in two Super Bowls 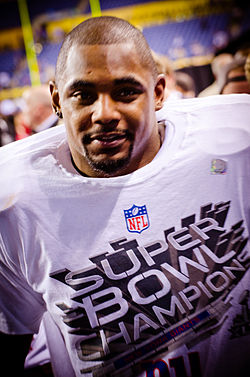 I show up on the injury report as much as the statsheet, but if Iâ??m healthy, Iâ??m going to be a late-round steal in most leagues. Last year I had more than 1,000 yards on the ground despite my injuries, and I had six rushing touchdowns despite Andre Brown vulturing my goal line duties around mid-season. Now Iâ??m in Indianapolis, and my new offensive coordinator is implementing a West Coast offense that should get me plenty of carries and a few catches each game. Plus, Iâ??ll be the goal line guy. If Iâ??m not wearing a boot.

“They stepped up and showed me a lot today, just in preparation for next season.”

“I'm really big on the I-formation. I've been waiting on this for a while -- since I got here, I guess.”

“It was great of the fans to come out. I wanted to show them what I can do and what we are capable of.”

“Hopefully so. I was just trying to hit it as hard I can.”