Ahmed Sékou Touré (var. Ahmed Sheku Turay) (January 9, 1922 – March 26, 1984) was a Guinean political leader who was elected as the first President of Guinea, serving from 1958 until his death in 1984. Touré was among the primary Guinean nationalists involved in gaining independence of the country from France 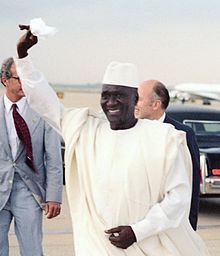 To take part in the African revolution, it is not enough to write a revolutionary song. You must fashion the revolution with the people. And if you fashion it with the people, the songs will come by themselves.

We prefer poverty in liberty than riches in slavery.