Ahmir Khalib Thompson (born January 20, 1971), known professionally as Questlove (stylized as ?uestlove), is an American percussionist, multi-instrumentalist, DJ, music journalist, record producer, and occasional actor. He is best known as the drummer and joint frontman (with Black Thought) for the Grammy Award-winning band The Roots. The Roots have been serving as the in-house band for The Tonight Show Starring Jimmy Fallon since February 17, 2014, continuing the role they served during the entire run of Late Night with Jimmy Fallon. He is also one of the producers of the Broadway musical Hamilton. He is the cofounder of Okayplayer and Okayafrica. Additionally, he is an adjunct instructor at the Clive Davis Institute of Recorded Music at New York University 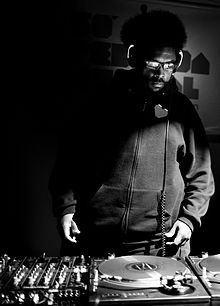 And even though people like to furrow their brow like they suspect you're not being honest about yourself, the truth is that they worry that you're not serving their idea of you.

Every time a new record started, people exhaled with pleasure, or their bodies moved automatically. I really started getting high off of the euphoric exclamations. Every record I put on was like a baptism.

Part of me would just like to relax and have one job that pays me the amount I need to survive. And another part of me wants the creativity that comes out of struggle and frustration and fear. It's a never-ending cycle, which must be how I want it, on some level.

How do you plan a rebirth? I'm not sure you do. You just stand in the darkness until you can't endure it any long, and then you move forward until you're standing in the light.

When you live your life through records, the records are a record of your life.