Aida Overton Walker (14 February 1880 – 11 October 1914), also billed as Ada Overton Walker and as "The Queen of the Cakewalk", was an African-American vaudeville performer, actress, singer, dancer, choreographer, and wife of vaudevillian George Walker. She appeared with her husband and his performing partner Bert Williams, and in groups such as Black Patti's Troubadours. She was also a solo dancer and choreographer for vaudeville shows such as Bob Cole, Joe Jordan, and J. Rosamond Johnson's The Red Moon (1908) and S. H. Dudley's His Honor the Barber (1911). Aida Overton Walker is also well known for her 1912 performance of the “Salome” dance at Hammerstein’s Victoria Theatre. This was Aida’s response to the national “Salamania” craze of 1907 that spread through the white vaudeville circuit 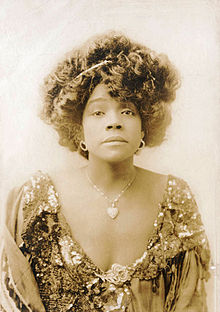 Unless we learn the lesson of self-appreciation and practice it, we shall spend our lives imitating other people and deprecating ourselves.