Amanda Joy "AJ" Michalka (/mi?????k?/ mee-SHAH-kah; born April 10, 1991), often credited as simply AJ, is an American actress, singer-songwriter, and musician. She was a model prior to becoming an actress, and is best known as one-half of the duo Aly and AJ (formerly 78Violet) with her sister Aly Michalka. AJ recorded the theme song and accompanying music video for the film Secretariat, entitled "It's Who You Are." She also issued a single and video called "All I've Ever Needed" from her 2013 film Grace Unplugged. She has also had a successful acting career, and after two seasons in a recurring role as Lainey Lewis on the ABC sitcom The Goldbergs, she has been promoted to a regular role on the series for the third season onward 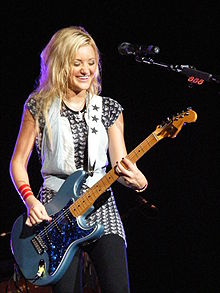 My dream is to work with people like Meryl Streep, Michael Fassbender, Christian Bale and Cate Blanchett. To me, those are true storytellers - genuine people who have stories to tell and make incredible films.

I want make more records with my sister. I want to go on the road. I want to tour around the world. I want to continue to make great films and work with incredible directors that I respect and look up to.

You kind of need to weed through who is wanting to be a true friend.

So many people grew up in the church, and you can have an awesome upbringing, but I made a personal conviction; I made a personal decision when I was very young. I enjoy going to church without my parents. On Sunday mornings, I want to go. Bible studies on Wednesdays... I have a relationship - not just through my parents.