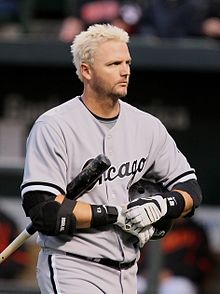 “There's a different type of feeling on this team than on the playoff teams I've been on. This is a very unselfish group of guys. This season ranks right up there with the best I've experienced. But having said that, I've won a division title before. This is all about winning the World Series.”

“These guys aren't going to quit or go away. They've done things that are very special.”

“You can't have a pattern with him, because he swings at everything and he hits everything hard. Heck, I don't know. Sometimes you just hope he hits it at guys.”