Akeem Christopher Ayers (born July 10, 1989) is an American football linebacker for the Indianapolis Colts of the National Football League (NFL). He was drafted by the Tennessee Titans in the second round of the 2011 NFL Draft and has also played for the New England Patriots and St. Louis Rams. He played college football at UCLA 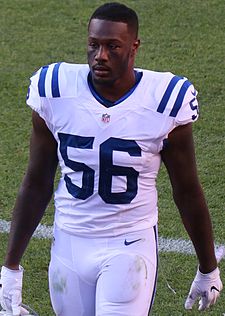 Martin Luther King Jr. was a great teacher and just a great person in general.

My great grandma, she's in her 80s, so she tells me a lot about the things she's seen. I learn a lot from her.

I just always loved watching the History Channel and stuff like that. I could come home from school and just watch it all day. It just interested me.

You've got to be a Lakers fan growing up in L.A. with all these championships.

Lakers just been taking care of business for a long time now. It's easy to love them.

You see guys getting in trouble, but you also see the good in people. It's just a matter of always learning.

It's intense in every sport. No matter what, USC vs. UCLA is crazy. Especially when it comes down to football and basketball, it's just nuts.