Akira Toriyama (?? ?, Toriyama Akira, born April 5, 1955 in Nagoya, Aichi) is a Japanese manga and game artist. He first achieved mainstream recognition for his highly successful manga Dr. Slump, before going on to create Dragon Ball—his best-known work—and acting as a character designer for several popular video games such as the Dragon Quest series, Blue Dragon and Chrono Trigger. Toriyama is regarded as one of the artists that changed the history of manga, as his works are highly influential and popular, particularly Dragon Ball, which many manga artists cite as a source of inspiration 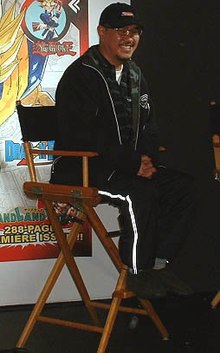 I was an avid anime watcher until I was about 10, when I moved to manga. I think I am influenced by Osamu Tezuka's and Walt Disney's works which I watched during that time, such as Tetsuwan Atom and 101 Dalmatians.

Drunken Master (the first one). If I hadn't seen this movie, I would never have come up with Dragonball.

The method of producing comics in Japan is very hectic, but it's also rewarding because it's possible to do both the story and art all by yourself. In this way, it's possibly to bring out one's individuality. If this idea appeals to you, I call on you to try drawing your own manga.

Too much FANTASY loses REALITY, too much HOPE may seem somehow EMPTY.

But there's people I care about! And this time around, Iâ??m not gonna just stand by and let them all get hurt!

Actually, I have a lot of hobbies, but I've kept up with model-building the longest. In particular, I love military models.