Allan "Al" Jaffee (born Abraham Jaffee, March 13, 1921) is an American cartoonist. He is notable for his work in the satirical magazine Mad, including his trademark feature, the Mad Fold-in. As of 2016, Jaffee remains a regular in the magazine after sixty years and is its longest-running contributor. In the half-century between April 1964 and April 2013, only one issue of Mad was published without containing new material by Jaffee. In a 2010 interview, Jaffee said, "Serious people my age are dead." Wikipedia 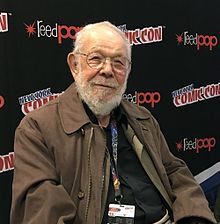 Almost every cartoonist, when he's sitting down to draw a funny face, if you watch him closely, his mouth is gonna curl to the expression that he's drawing. But when I would write a story - I know it's going to sound almost ridiculous and infantile - I would, in a way, start living it.

Book dedication To myself, without whose inspired and tireless efforts this book would not have been possible.

I guess if people all followed the basic principles of their own religions, they would love everybody instead of hating half the world.

When I had independence, it was a constant battle within me to figure out when am I on my own. And also the insecurity that my life engendered, especially as a freelance cartoonist, kept me in a constant state of anxiety as to whether I am going to be able to meet my financial obligations.

When you live from freelance check to freelance check, your mind is always on "What's the next piece I'm going to write, or draw, that'll pay this month's rent?" And so going out to play ball with my kids was a low priority.

It doesn't take a brilliant mind to notice that adults are telling you what to do and then they do the opposite. I mean, I can't recall every stupid thing that adults were doing when I was six or seven. Some of it was the religious restrictions, where there were certain things that you were allowed to do and certain things that you weren't allowed to do, and I couldn't make sense of those things.