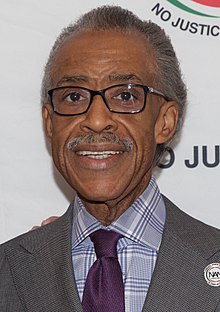 Alfred Charles Sharpton Jr. (born October 3, 1954) is an American civil rights activist, Baptist minister, television/radio talk show host and a former White House adviser who, according to 60 Minutes, became President Barack Obama's "go-to black leader." In 2004, he was a candidate for the Democratic nomination for the U.S. presidential election. He hosts his own radio talk show, Keepin' It Real, and he makes regular guest appearances on Fox News (such as on The O'Reilly Factor), CNN, and MSNBC. In 2011, he was named the host of MSNBC's PoliticsNation, a nightly talk show. In 2015, the program was shifted to Sunday mornings

I was raised by a single mother who made a way for me. She used to scrub floors as a domestic worker ...

I could have easily been a statistic. Growing up in Brooklyn, N.Y., it was easy - a little too easy ...

The resignation of Attorney General Eric Holder is met with both pride and disappointment by the Civ ...

Following Michael Brown's death, I went to Ferguson and met with his parents. I stood with them as t ...

Everything from who sits on your local board of education to the prosecutors and judicial appointmen ...

Either we need to redefine what probable cause means and say that police are not subject to it, or w ...

Let me be clear: as I have said repeatedly, I do not believe that all police officers are bad, nor d ...

If the black vote does not come out in big numbers in the age of Ferguson and voter ID, it will empo ...

When you loot or behave violently, you give grounds to those that try to justify illegal police abus ...

From racial profiling and being pulled over just for 'driving while black' to this new phenomenon of ...

If it weren't for the mentorship and guidance from people like my mother, James Brown and others, I ...

I very rarely read any fiction. I love biographies; I read about all kinds of people. I love theolog ...

The horrific cases in Ferguson, in Staten Island with the death of Eric Garner, and all across the c ...