Allen Ray Sarven (born July 18, 1963) is an American professional wrestler, color commentator, training coach and actor better known by his ring name of Al Snow. He is currently signed with Impact Wrestling and is best known for his work in Extreme Championship Wrestling and World Wrestling Entertainment. Since 2010, Snow has worked as a road agent for Total Nonstop Action Wrestling and with its former developmental territory, Ohio Valley Wrestling, as a show producer 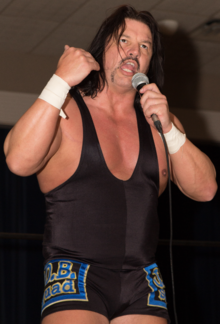 I'm being accused of being a murderer! I'M being ACCUSED of being a molester!... They say my idea of a fun day is a dark lonely field and the urunj of a car, and a large stick and a roll of duct tape! My MOM shops at Wal-Mart! She gets calls all the time now; she's worried about me! I'm not the most emotionally stable guy in the world; I'll admit that... I do have some problems, but my God, I'm not a murderer!

What does everybody want? HEAD!