Dame Vera Baird DBE QC (née Thomas; born 13 February 1950) is the Northumbria Police and Crime Commissioner, a British Labour Party activist, barrister, author and lecturer. She serves as a Visiting Professor of Legal Practice at Newcastle University, as an Honorary Doctor of Civil Law at Northumbria University, as a Visiting Law Professor at London South Bank University, as a Visiting Law Lecturer at Teesside University and is an Honorary Fellow of St Hilda's College, Oxford. She currently sits as a Member of the Trustees of Respect (which advises male domestic abuse victims and accredits courses for rehabilitating perpetrators of abuse), is the only woman honorary member of the Durham Miners Association. She was the Member of Parliament for Redcar from 2001 to 2010, was a UK Government Minister from 2006 to 2010 and the UK Government's Solicitor General for England and Wales from 2007 to 2010 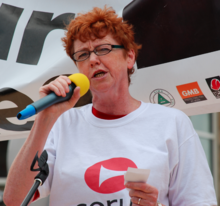 My highest aspiration in life is to serve as the Limerick Laureate of Nantucket.