Lieutenant General Sir Robert Alan Fry, KCB, CBE (born 6 April 1951) served as a Royal Marine for over 30 years and was involved in military operations in Northern Ireland, the Gulf, Kosovo, Iraq and Afghanistan. After retirement from military service he went into private business and, in 2007, became CEO of Hewlett Packard's defence and security business in Europe, the Middle East and Africa. In 2010 he was appointed chairman of McKinney Rogers International and subsequently, in 2011, Albany Associates 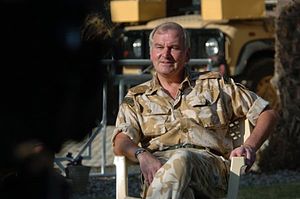 “An examination of the exterior of the building would show some form of small missile hit the building at around the eighth floor. It caused minimal damage.”

“The task of police was made much more difficult if not impossible by the failure to give a precise location, indeed to give a wrong location,”

“clearly the sort of weapon we believe was used in this attack is known to be in the hands of certain groups. They will be uppermost in our minds.”

“I am linking the crimes. We are treating this as a racist offense.”

“This is another vicious atrocity with terrorist impact, ... The device has similarities to the device that exploded in Brixton with terrible consequences last Saturday.”

“This is another vicious atrocity with terrorist impact. The device has similarities to the device that exploded in Brixton with terrible consequences last Saturday.”

“This was a calculated, evil act by people who were seeking to maim and kill. We are extremely fortunate that people were not killed here last night.”

“This is a completely reckless terrorist attack,”

“I am afraid there are two dead.”