Alan Stuart Trammell (born February 21, 1958) is an American former professional baseball shortstop, manager and coach. His entire 19-year playing career was with the Detroit Tigers. He currently serves as a special assistant to the General Manager of the Detroit Tigers. Trammell, nicknamed "Tram", played his entire career with the Tigers, highlighted by a World Series championship in 1984 over his hometown San Diego Padres and an American League East division championship in 1987. Although his arm was not overpowering, he had a quick release and made accurate throws, ultimately winning four Gold Glove awards. Trammell's defense perfectly complemented his double-play partner, Lou Whitaker. The two formed the longest continuous double-play combination in major league history, playing 19 seasons together. At the plate, Trammell was one of the best-hitting shortstops of his era and won three Silver Slugger awards. Trammell later served as Detroit's manager from 2003 through 2005. He also served as the interim manager for the Arizona Diamondbacks during the final three games of the 2014 season 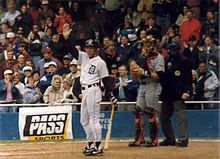 “He kind of grows on you, ... He's a good baseball player with good instincts. He's already a major league outfielder. This is more than just a look-see. We think Curtis is definitely a part of our future.”

“We broke out. It's been a while, hasn't it? To win the series, win the last two games in a row after a losing streak, after a rough couple of weeks. We usually bounce back every time. We'll see.”