Alan Chester Valentine (February 23, 1901 – July 14, 1980) was an American academic who competed on the gold-medal winning American rugby union team in the 1924 Summer Olympics, was president of the University of Rochester, and served in the Truman Administration as a Marshall Plan official and as the first head of the Economic Stabilization Agency 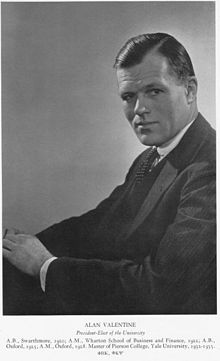 For thousands of years, father and son have stretched wistful hands across the canyon of time, each eager to help the other to his side, but neither quite able to desert the loyalties of his contemporaries. The relationship is always changing and hence always fragile; nothing endures except the sense of difference.

“Whenever science makes a discovery, the devil grabs it while the angels are debating the best way to use it.”

Freedom is born of self-discipline. No individual, no nation, can achieve or maintain liberty without self-control. The undisciplined man (or woman) is a slave to his own weaknesses.

#Maintain #Self Control #Self Discipline #Slave