Haim (pronounced HY-?m, /?ha?.?m/, Hebrew: ????? Life and stylized as HAIM) is an American pop rock band from Los Angeles. The band consists of three sisters: Este Haim (bass), Danielle Haim (guitars and lead vocals), and Alana Haim (guitars and keyboards), as well as drummer Dash Hutton. In addition to their primary instruments, each member is also proficient in several others. The group's pop sound on their studio work stands in contrast to the more rock-based music of their live shows 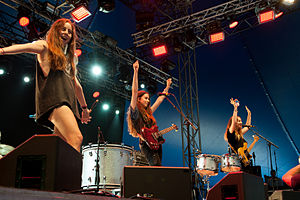 I want to be in New Zealand SO BADLY. I've dreamt about coming to New Zealand ever since I was a kid.

I've only seen pictures of New Zealand but everything I see is so pretty. Your eyes just... I don't think my eyes could take the beauty!

I just want to see around beautiful things. I don't realise how much I miss out on just seeing beautiful scenery.

I love LA, but we don't really have beautiful natural things to look at. I just want to be in nature and go back to my roots and just see beautiful things, that's really all I want.

I've always been obsessed with tigers, I love white tigers I think they're very glamourous in a weird way.

I would love to be friends with Kendrick Lamar because I am just a huge fan of his music, I think he is so cool and he uses so many interesting sounds and has such good melodies and is just a beautiful rapper, his raps are just so well-written and his tracks are so insane, I am obsessed with him.