Alastair George Bell Sim, CBE (9 October 1900 – 19 August 1976) was a Scottish character actor who began his theatrical career at the age of thirty, but quickly became established as a popular West End performer, remaining so until his death in 1976. He also appeared in more than fifty British films, starting in 1935 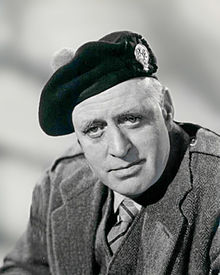 It was revealed to me many years ago with conclusive certainty that I was a fool and that I had always been a fool. Since then I have been as happy as any man has a right to be.