Alben William Barkley (/?b??rkli/; November 24, 1877 – April 30, 1956) was a lawyer and politician from Kentucky who served in both houses of Congress and as the 35th Vice President of the United States from 1949 to 1953. In 1905, he was elected county attorney for McCracken County, Kentucky. He was chosen County Judge/Executive in 1909 and U.S. Representative from Kentucky's First District in 1912. As a Representative, he was a liberal Democrat, supporting President Woodrow Wilson's New Freedom domestic agenda and foreign policy 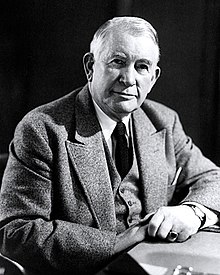 ...the best definition that I heard of that is that a bureaucrat is a Democrat who has a job that a Republican wants.

I would rather be a servant in the House of the Lord than to sit in the seats of the mighty.

A bureaucrat is a Democrat who holds some office a Republican wants.

The best audience is one that is intelligent, well-educated, and a little drunk.

I shouldn't toot my own horn, but he who doth not toot his own horn alloweth it to remain untooteth.

For six years profound silence was mistaken for profound wisdom.