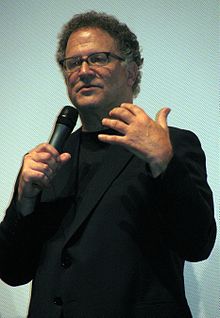 Albert Lawrence Brooks (born Albert Lawrence Einstein; July 22, 1947) is an American actor, filmmaker and comedian. He received an Academy Award nomination for Best Supporting Actor for 1987's Broadcast News. His voice acting credits include Marlin in Finding Nemo, and recurring guest voices for The Simpsons, including Russ Cargill in The Simpsons Movie (2007). Additionally, he has directed, written, and starred in several comedy films, such as Modern Romance (1981), Lost in America (1985), and Defending Your Life (1991) and is the author of 2030: The Real Story of What Happens to America (2011)

I'm not a big fan of the post-Armageddon stories, where Denzel Washington is walking around in a tor ...

I was in Kashmir last weekend. Went to visit one of my sweaters.

If you paint, write, do mosaics, knit - if it's solving that part of your brain saying, 'I need to d ...

If you look at the best-seller list for American fiction, they're all sequels to detective stories o ...

Getting older is a lot of fun. Right up there with chewing glass or putting your hand in a blender.

I had a very wise person tell me that he thinks marriage, when you're younger, you keep thinking you ...

How many people didn't get a part who would have been better than the person who got the part? Thous ...

I've always liked to think ahead. Not stupid-far ahead. A hundred years doesn't interest me. But 20 ...

Nobody will leave any place unless they're forced out. That's the nature of humans. Once you're ther ...

Twitter, to me, works if you're funny. Twitter doesn't work as a promotional tool unless you do it v ...

I never wanted to be a director.

My friend Harry Nilsson used to say the definition of an artist was someone who rode way ahead of th ...

To call New York's traffic at holiday time a nightmare is to understate.