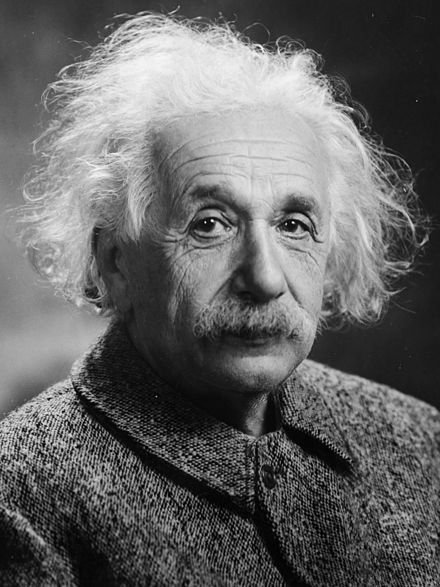 Albert Einstein (/?a?nsta?n/; German: [?alb???t ?a?n?ta?n]; 14 March 1879 – 18 April 1955) was a German-born theoretical physicist. He developed the general theory of relativity, one of the two pillars of modern physics (alongside quantum mechanics). Einstein's work is also known for its influence on the philosophy of science. Einstein is best known in popular culture for his mass–energy equivalence formula E = mc2 (which has been dubbed "the world's most famous equation"). He received the 1921 Nobel Prize in Physics for his "services to theoretical physics", in particular his discovery of the law of the photoelectric effect, a pivotal step in the evolution of quantum theory

If people are good only because they fear punishment, and hope for reward, then we are a sorry lot i ...

The hardest thing to understand in the world is the income tax.

In matters of truth and justice, there is no difference between large and small problems, for issues ...

Once we accept our limits, we go beyond them.

The only reason for time is so that everything doesn't happen at once.

Most people say that it is the intellect which makes a great scientist. They are wrong: it is charac ...

A table, a chair, a bowl of fruit and a violin; what else does a man need to be happy?

Anger dwells only in the bosom of fools.

The gift of fantasy has meant more to me than my talent for absorbing positive knowledge.

If we knew what it was we were doing, it would not be called research, would it?

The pursuit of truth and beauty is a sphere of activity in which we are permitted to remain children ...

It is strange to be known so universally and yet to be so lonely.

Love is a better teacher than duty.

I am not only a pacifist but a militant pacifist. I am willing to fight for peace. Nothing will end ...